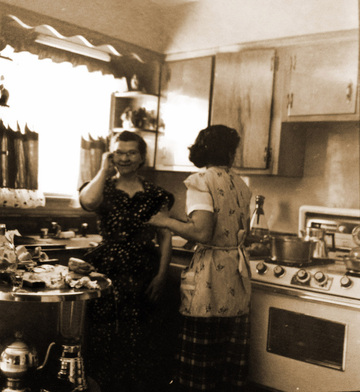 Everything I ever learned about cooking was revealed to me in my  grandmother's and mother's kitchen. Except for a few vacations, we  did little else together as an extended family but eat. What we ate, why we were  eating it, who was cooking it or not, where we were eating it, were all  important decisions surrounding every one of my Italian family dinners. Almost  every event involved food. And sometimes it seemed that the event was just an  excuse to eat. In particular to eat certain types of appropriately prepared  foods.

Don't get the wrong idea about this.  These happy, bustling affairs  that  took place in tiny Bronx apartments with even tinier kitchens are some  of  my best childhood  memories. Oh sure, maybe other people remember family weekends at the lake or flag football in the yard with the men folk or  sing-a-longs  by the bonfire. But me, I revel in the memory of fresh made  pasta laying on clean white sheets across my grandmother's bed and the smell  of semolina flour wafting through the living room. We experienced a great collective pride as we cast our  gaze over the yards of fresh dough  that  would soon make everyone else in the family swoon when they tasted it. On the day of the event, whether it was Christmas, Easter, Thanksgiving or cousin Joey's birthday,  all the relatives would congregate at the chosen tiny  apartment. Usually that was my grandparents place. The living room was the  largest room and that was where a large table was set up. It was completely  covered with what was normally hand embroidered linen and the all the dishes  silverware and glassware would be on the table before anyone arrived. The men  would occupy what available living room furniture they could find. The women  went to the kitchen and the children were banished to playing in one of the crowded bedrooms in the back but, not I. I was in the kitchen with the adult women  watching at first and then later performing the tasks of a line cook. The  chopping, the cutting, the stirring were all closely monitored and  immediately corrected if I went astray. I had no interest what-so-ever in the shenanigans  going on that bedroom; I was cooking.

My parents eventually bought a townhouse and to us it was a mansion! That  kitchen was large enough to have a dining room table in it. Now here was a  place I could really cook! But that's not what happened.  My father passed away;  my mother sold the house; and we moved into an apartment. It was there that my cooking journey really began. With my mother working and I home alone, I  turned on to the TV. Julia Child and Graham Kerr (The Galloping Gourmet )became  my mentors. I prepared dinner so my mother wouldn't have to cook  after a long day at  work. I experimented frequently and she ate what ever I concocted. There were many mistakes and I learned from them all.

I don't know what other latch key kids did at home alone but I created "Food World". Me and my friends Julia and Graham went through cook books, experimented with technique and sometimes produced an edible masterpiece or two. They were the best  baby sitters ever!
recipes, food, italian, laura, ciffone, cooking, mixing, spoon